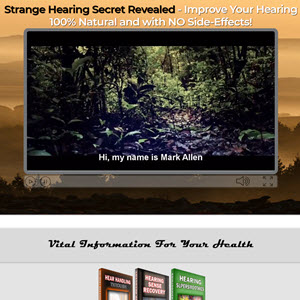 Functional hearing loss (FHL) is frequently forgotten or misdiagnosed in the pediatric population, despite the fact that it is well documented (Bowdler and Rogers, 1989). The diagnosis is often missed in children because of lack of awareness of its manifestations (Pracy et al., 1996), its incidence (Barr, 1963), and its multiple causes (Broad, 1980).

Functional hearing loss is one of several terms used to describe a hearing loss that cannot be ascribed to an organic cause (Aplin and Rowson, 1986). In FHL, actual audiometric thresholds are inconsistent with the voluntary thresholds of a patient. The term pseudohypacusis was coined by Carhart (1961) to describe a condition in which a person presents with a hearing loss not consistent with clinical or audiologic evaluation. Nonorganic hearing loss is used interchangeably with FHL and pseudohypacusis in that these terms do not comment on the intent, conscious or subconscious, of the patient being tested (Radkowski, Cleveland, and Friedman, 1998). Terms such as psychogenic hearing loss and conversion deafness imply that the cause of the auditory disturbance is psychological, whereas malingering suggests the conscious and deliberate adoption or fabrication of a hearing loss for personal gain (Stark, 1966). FHL often appears as an overlay on an organic impairment. As such, the term functional overlay is used to describe an exaggeration of an existing hearing loss.

The incidence of FHL in children is not well documented. Valid estimates are lacking, owing to lack of consensus on the definition of FHL and the absence of a concerted effort to collect such data. Estimates range from 1% to 12%, but the validity of these figures is undermined by the lack of standard criteria for diagnosing FHL in children (Broad, 1980). Pracy et al. (1996) suggest that the incidence is higher than expected and cannot be compared with the reported incidence in adults. A number of studies that do report incidence suggest that FHL occurs more than twice as often in girls as in boys (Dixon and Newby, 1959; Brockman and Hoversten, 1960; Campanelli, 1963). In pediatric studies of FHL, the condition is typically diagnosed in adolescence (Berger, 1965; Radkowski, Cleveland, and Friedman, 1998).

The ability to describe a characteristic audiometric and behavioral profile of FHL in children is made problematic by its multiple manifestations and definitions. Aplin and Rowson (1990) described four subgroups of FHL: (1) cases involving emotional problems that typically preceded the audiologic examination;

(2) cases in which mild anxiety or conscious mechanisms produce a hearing loss during an audiologic examination; (3) cases of malingering (the hearing loss is deliberately and consciously assumed for the purposes of financial gain); and (4) cases in which the audiologic discrepancies are artifactual as a result of lack of understanding or inattention during audiometric testing.

(3) the absence of a shadow curve with a severe to profound unilateral hearing loss, and (4) a discrepancy between the speech reception threshold and the pure-tone average.

Misunderstanding, confusion, or unfamiliarity with the test directions or procedures must be determined before further testing for FHL is initiated. After reinstruction, modification of speech audiometry is undertaken when FHL in a child is suspected. Pracy et al. (1996) described successful use of the Fournier technique (1956), in which the level of speech presentation is varied, thereby tricking the patient into responding at a level at which he or she had not previously responded. Other techniques using speech audiometry include use of an ascending threshold determination technique (Harris, 1958) and presentation of informal conversation at levels below the voluntary pure-tone thresholds.

Hosoi et al. (1999) proposed suggestion audiometry as a useful technique to detect FHL in children as well as to determine true hearing levels. In suggestion audio-metry, standard audiometric procedures are preceded by an information session on the benefits of using a hearing aid. The child is shown a hearing aid, given information about it, and ultimately wears the hearing aid in the off position during testing. The hearing aid is without tubing or an earmold; consequently, the earphone used during testing is placed over the auricle with the hearing aid. Hosoi et al. found that 16 of 20 children diagnosed with FHL showed a significant change in hearing level following the suggestion technique.

The use of adult-oriented tests of pseudohypacusis has had limited success in children demonstrating FHL. The Stenger test (Chaiklin and Ventry, 1965), while easy to conduct, is appropriate only for unilateral hearing losses. The Doerfler-Stewart test (1946), Bekesy audiometry (Jerger and Herer, 1961), and the Lombard test (Black, 1951) require special equipment and are rarely used in adults in the twenty-first century.

Cross-check procedures such as otoacoustic emissions and acoustic reflex testing can be used to determine the reliability of pure-tone thresholds (Radkowski, Cleveland, and Friedman, 1998). However, for actual threshold determination, the auditory brainstem response (ABR) measurement has been shown to be effective. Yoshida, Noguchi, and Uemura (1989) performed ABR audiometry with 39 school-age children presenting with suspected FHL and found normal hearing in 65 ears of 35 patients. Although ABR audiometry is not a hearing test, Sanders and Lazenby (1983) suggest it can be a powerful tool in the identification and quantification of FHL.

After detecting FHL and determining true hearing levels, Hosoi, Murata, and Levitt (1999) suggest it is essential that information about the cause of the functional hearing loss be obtained. Reports on FHL in children cite lack of attention, deflection of attention, school difficulties, a history of abuse, and emotional problems as possible causes, among others.

Barr (1963) found that the extra attention paid to children because of their purported hearing difficulty had encouraged them, consciously or unconsciously, to feign hearing loss. Children with previous knowledge of ear problems may use lack of hearing and withdrawal from communication as a response to problems experienced at school (Aplin and Rowson, 1986). A history of trauma immediately preceding the complaint of hearing loss was reported in 18 patients studied by Radkowski, Cleveland, and Friedman (1998). Drake et al. (1995) found that FHL may be an indicator of child abuse.

A high suspicion in approaching children will not delay early intervention in cases of an organic hearing loss, but failure to recognize FHL can be costly and potentially hazardous to the pediatric patient (Radkowski, Cleveland, and Friedman, 1998). Unnecessary radiographic studies or exploratory surgical intervention, inappropriate amplification, and financial and psychosocial costs are among the possible outcomes of inappropriate diagnosis of FHL in children. Spraggs, Burton, and Graham (1994) reported on five adult patients who underwent assessment for cochlear implantation and were found to have nonorganic hearing loss. Similar findings have not been reported in the pe-diatric population, but with the proliferation of cochlear implants in children, accurate diagnosis of hearing loss is essential.

Once the diagnosis of FHL in a child has been established, a nonconfrontational approach is recommended. Giving the child the opportunity to ''save face'' often can be achieved with reinstructing, reassuring, retesting, and convincing the child that the hearing loss will improve. Retesting with accurate results is often accomplished during one visit but may require follow-up visits.

Labeling the child a malingerer is detrimental to the child and decreases the probability of obtaining accurate behavioral thresholds. If the child is labeled as exhibiting FHL, the chance to back out gracefully is lost, and the functional component of the hearing loss may be solidified (Pracy et al., 1996). Pracy and Bowdler (1996) advocate an approach that treats the child as if the hearing loss were real, followed by the use of speech audiometry techniques to determine actual hearing thresholds. In recalcitrant cases, ABR may be required for threshold determination. Psychiatric referral is rarely necessary or desirable and should be reserved only for the intractable child (Bowdler and Rogers, 1989).

Sanders, J., and Lazenby, B. (1983). Auditory brain stem response measurement in the assessment of pseudohypoa-cusis. American Journal of Otology, 4, 292-299.